Monday, September 21, 2020:  HOUSTON – Two women riding in the back of an Uber are dead after police said a pursuit suspect crashed into the car they were in. Police said the driver they believe is responsible is now facing felony murder charges.

Officers said the crash happened at the intersection of Jensen and Parker around 11:30 Saturday night. According to police, they were chasing a vehicle after a driver, identified as 45-year-old Brian Okeith Tatum, reportedly ran a red light. He was estimated to be driving more than 100 mph.

Houston police say it started when Harris County deputies tried to stop a driver for running a red light. The driver didn’t stop, but instead took off at a high rate of speed and slammed into the rideshare car.

Deputies tried pulling over the driver as he and another vehicle repeatedly sped through red lights around 11:30 p.m. near Jensen Drive and Tidwell Road. One of the vehicles stopped but the other fled, authorities said.

The chase continued for another mile and the suspect entered an intersection at Parker Road, also along Jensen Drive. The suspect — whose wife was in the car with him — slammed into the side of the rideshare vehicle as that driver tried turning left.

Police said the pursuit came to an end when Tatum crashed into an Uber driver in a silver Honda and killed the two women sitting in the back seats.

The Uber driver was transported to Ben Taub Hospital in unknown condition and the suspect was transported to the hospital with minor injuries, police said. Investigators said Tatum has an extensive criminal record. The suspect and rideshare driver are both expected to survive. 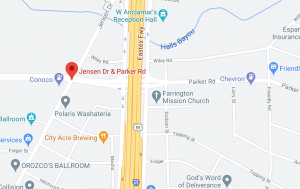 If you hire the services of a taxi-cab in Texas, city ordinances require the driver to be an employee of a bonded and fully insured company so there is coverage should an accident occur. Ridesharing services like Uber and Lyft, however, are different they contract their drivers individually. These drivers are responsible for providing their vehicles and using their personal auto insurance to cover any liability issues.

Ridesharing services like Uber and Lyft are growing in popularity as people look for more economic and efficient ways to get around town. As their popularity increases though, so does the potential for rideshare accidents.

Most ridesharing vehicles used for Uber and Lyft are personal vehicles owned by their drivers. While the drivers may carry personal auto insurance, most of the standard auto insurance policies do not cover accidents for vehicles being used for these ride sharing services unless the owner has purchased a separate coverage of insurance for this purpose. As these services increase in use and popularity, their presence on the road creates new and evolving legal issues for attorneys to evaluate.

Although the same laws of negligence in an auto accident apply, the added layer of complexity and whether or not the ride sharing company in addition to the driver can be held liable for an auto accident makes it an especially complex matter.

For example, did you know that if the Uber or Lyft driver’s auto insurance company and their lawyers determine your injuries aren’t covered by the driver’s policy, then you may be responsible for using your own insurance to cover your medical expenses? If that happens, what will you do if you have only minimal coverage or, if you don’t even drive or own a vehicle, aren’t covered at all?

As in any accident, the driver at fault for the collision should be responsible for any compensation entitled by injured passengers. But there may be an instance where insurance coverage limits what an injured passenger may collect for their damages. Attorneys for ride sharing companies are adding to the complexity of these types of claims by asserting their drivers are merely contractors, not employees.

In addition to dealing with the insurance companies involved in representing the driver, you may be faced with the potential of being denied coverage for any injuries you may have sustained if the ridesharing driver has failed to purchase the necessary insurance to cover his services.

These issues are posing challenges for Texas rideshare car accident lawyers. As ridesharing services such as Uber and Lyft continue to grow, you will need to know what to do if you are ever in a rideshare accident.

If you, a family member or loved one has been injured or has suffered a wrongful death due to driving accidents, auto accidents, and 18-wheeler accidents, contact an attorney who specializes in these cases to review your legal options.  You may be entitled to compensation for damages, medical treatments, and lost wages due to the incident.